I’ve been AWOL.  MIA.  I have completely abandoned my blogging obligations.  It’s been nearly a week since you’ve heard from me.  I’m sure you enjoyed the quiet, but I’m back now, and ready to catch you up on the happenings of the last several days.

You knew my week got off to a rocky start when I told you about my flat tire debacle last Monday.  Tuesday I backtracked to Sunday to show you the scenery around here.  And Wednesday was Groundhog Day, for which I worked and worked to create an inside look at my hometown- Punxsutawney Phil’s hometown.  That post kept sounding cynical and jaded, though, so I was going to change topics and present you with something really fun and funny for Friday.

Have you ever seen the movie, “Up in the Air” with George Clooney?  Remember what his character, Ryan Bingham, did for a living?  (I’ve just spend nearly an hour trying to track down a YouTube clip- even if you’ve seen it, it’s worth watching again.  Unfortunately, I can’t seem to find the scenes I want.)

Anyway, I received a speech on Thursday morning that took me back to that movie, resulting from a phone call from the west coast.  Almost the exact same speech- swear.  I literally almost laughed as they explained that I would be receiving my “packet” to tell me where to go from here, and requested that I return my keys and ID card, gather my personal things, and leave the building.  It may have been hysteria speaking.  Still, I was sane enough to honestly miss someone saying, ““Anybody who ever built an empire, or changed the world, sat where you are now. And it’s because they sat there that they were able to do it.” (An “Up in the Air” quote.)

Of course, my job does not define me, and I won’t be defined by reacting badly to a situation I don’t have control over.  So I’m moving on.  I’m taking the opportunity I’ve been given to help Ryan build the empire that is our life as a married couple.

We had already planned to be out of town this weekend, so I used my free time Thursday afternoon to finish my travel preparations.  In Punxsutawney, one thing you know you can always expect is the unexpected.

Remember when I told you that my family celebrates Christmas late each year, and that when I presented my homemade Christmas gifts to my mom and my aunts, I would pass it on?  Here’s a photo of the silverware wind chimes I made for them this year: 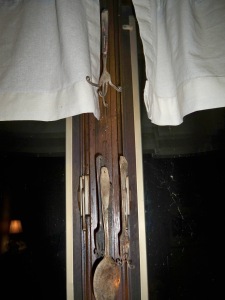 Simple enough; I found lots and lots of old silverware at a flea market, then used my pink hammer to beat it until it was completely flat.  (Not only was the end result pretty cool to look at; the action of beating silverware with a hammer was also a great form of stress relief!)  Then Ryan helped me to drill holes in the handles of the silverware, so I could thread heavy-gauge fishing line through the holes. I used my pink pliers to twist the tines of the forks to hold the lines for the dangling pieces, and my chimes have more forks than the others do, so I used the pliers to curl those tines also, for a more whimsical effect.  We celebrated Christmas on Saturday, and partied late into the evening.

We were awakened Sunday morning by the sounds of fire whistles.  Always expect the unexpected.

When we go to Punxsy, we always stay with Ryan’s parents.  Their house is just outside of town, but still pretty close to everything- including the fire station.  In the years since I started staying there, I’ve adapted pretty well to ignoring the whistles when they sound in the wee hours.  There have been only two exceptions.  The first time was the night the machine shed across the driveway from my parents’ house caught on fire, burning a fortune’s worth of my uncle’s farm equipment.  That night, the sound of the whistle stopped my heart before I even heard the address of the fire broadcast over the scanner.  The second time was Sunday morning.  The fire whistles sounded and something in the pit of my stomach told me that this was going to be close to home.  Close enough to be next door, as it turned out.  We awoke to the flurry of activity that always accompanies someone you know being in danger, and Ryan’s dad informed us that the problem was at the neighbor’s house where the carbon monoxide monitor had detected a problem.  Soon, fire trucks and ambulances were arriving and the neighbor came over to stay with us while the fire fighters checked her house for the source of the fumes.  Turns out, there was a problem with her furnace that seems to have started burning oil from within.  Scary.  Fortunately, within a few hours she was able to return to her home where the furnace repairman was waiting to diagnose and fix the problem.

Shortly afterward, just as I was leaving to collect Clohe from my mom’s care and say goodbye to my family, Ryan’s grandfather called to say that he wasn’t feeling well.  Ryan and his dad decided to take Grandpa to the emergency room to be sure he didn’t have pneumonia.  Fortunately, it turned out to be a sinus infection instead,  though he’s still pretty miserable.

So aside from a February Christmas celebration, being awakened by fire whistles on a Sunday morning, and a trip to the ER, the weekend ended on a pretty decent note.  We were home at a decent time, the car is unloaded and I have most of our stuff unpacked and put away, I have a load of laundry finished, and the best team won the Super Bowl (sorry, Steelers fans, it’s nothing personal, and it’s just my opinion.)  I’m ending the weekend on a happy note and ready to start the coming week with a smile and my head held high.  Because whatever happens, happens for a reason.  I’m ready for this.  I’m ready to take on the world and build an empire.  I’ve just closed one chapter of my life, and a new one is about to begin.

Come on back; a new chapter is sure to mean many new stories!