When we moved into this house six years ago, the first question I asked the landlords was if we were allowed to paint the walls.  The living room was sort of pinkish-white, the kitchen was trimmed in wallpaper with little pink flowers on it, the bathroom had yet another wallpaper with little pink flowers, and the guest rooms are neon: one is blue, and the other- the closet-sized room that serves as the laundry room as well as Ryan’s RC pit/office is green.

Anyway, they told us that painting would be fine, as long as I went neutral and had approval beforehand.  And since this year seems to have been the year of sprucing-up for this house,  I decided I wanted the kitchen painted before winter.  This past week, my beloved and I struck a deal: if I removed the wallpaper from the one wall and the bulkhead above the cabinets, he would help me to paint.  Deal on.  Except that… I had never removed wallpaper before… 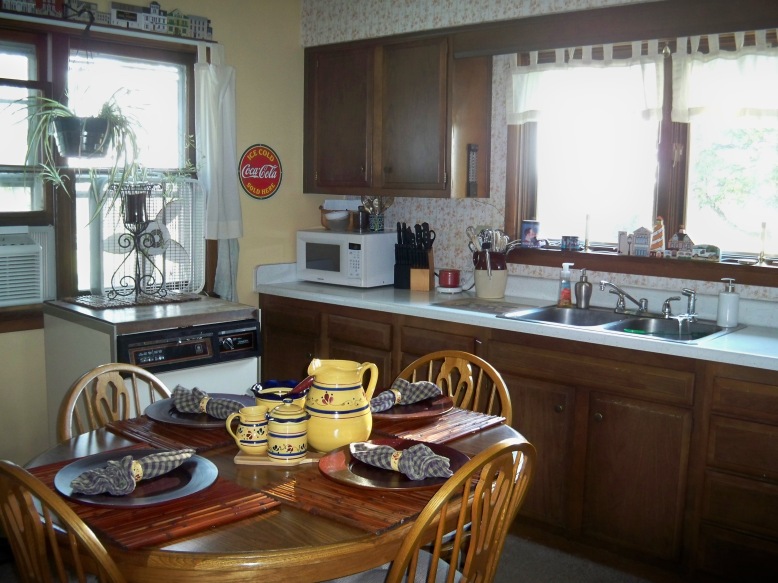 So Sunday, I ran to the store and bought a wallpaper scorer, to rough up the paper so I could tear.  I started to rip the pink flowered stuff down, only to realize that I was only pulling down the printed part of the paper; the backing and glue weren’t budging.  So I scored.  And I scraped with my putty knife.  An hour later, I had made little progress.  So I did what any modern, self-proclaimed handywoman would do: I Googled.  And I found that mixing a solution of equal parts water and fabric softener in a spray bottle made wallpaper fall off on its own…except that I was out of fabric softener.  The next result promised that equal parts water and vinegar would do the trick.  I had vinegar.  And- gasp!- it worked!  The backing came off easily with a few passes of the putty knife.  I was ecstatic- and so proud of myself.

You know how pride is one of the seven deadly sins?  Yeah, the heavens weren’t having it that I was proud.  So I received a curveball: there was another layer of paper underneath.  Under that pink patterned wallpaper (circa 1980) was yet another layer of wallpaper, circa 1962.  With vinegar solution in hand, and cuts on my palms from the putty knives, I managed to get each layer off by mid-day Monday.  Of course, there were still little chunks of glued- down wallpaper backing that were hanging on to the walls for dear life.  To get rid of those little suckers, I mixed some laundry detergent with water and scrubbed.  Most of the glue reluctantly gave up the fight, and the rest peeled off easily with my fingernail or a nudge from my putty knife.  By Monday evening, the walls were prepped to be painted.

Tuesday, while Ryan was at work, I packed up all my little decorative items from the kitchen and draped the appliances and table with sheets to protect them.  When he got home, we painted the ceiling so Wednesday we could paint.  While I was atop the refrigerator brushing to the edges where his roller wouldn’t reach, we had a conversation that went something like this:

Me: So this is how Michaelangelo painted the Sistine Chapel.  Lying on his back, just like this.

Ryan: Yes, but there’s one difference between you and Michaelangelo.

Me: Yeah, I know, his work is amazing.  And he used colors; I’m painting white.

Me: But it took him four years!  I’ll be done here in four minutes.  Besides, I can’t get ahead of you.

I tackled the walls myself on Wednesday.  I had all day to work, and there was absolutely nothing else I could focus on when a) there were PAINT cans in my kitchen, and b) most of my kitchen was in the guest bedroom.  I can’t work in a room that’s not aesthetically pleasing.  It stifles my creativity.  So I painted.  I thought, for my first time painting completely unsupervised ever in my entire life, that I could handle hand-painting the trim, where the walls meet the ceiling.  I was kinda wrong.

Ryan had to fix my screw-up places when he got home.  It took him literally all of about 15 minutes, when I had spent 9 hours painting, so I thought it was a pretty even trade.  And since each color took multiple coats to cover properly, I’m glad I got it done before he got here.  Wanna see the finished product? 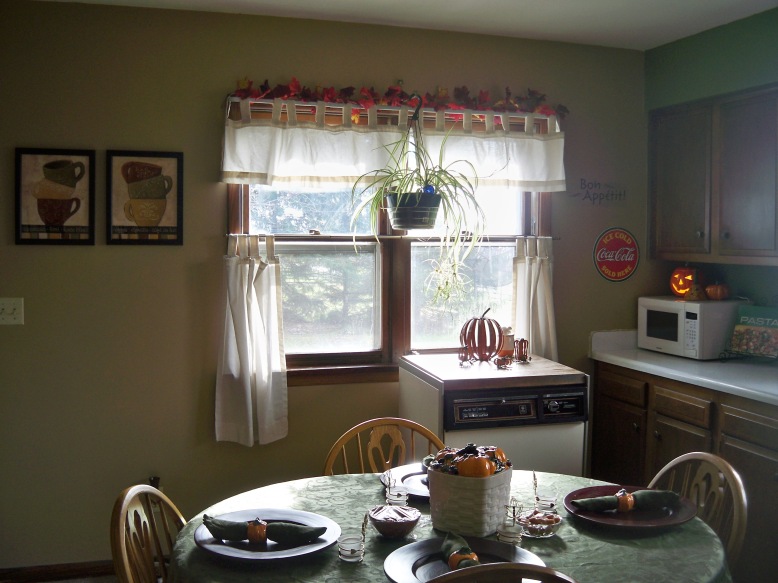 So now, with a more aesthetically pleasing kitchen than we had at this time last week, I’m retiring the paintbrush for awhile.  My shins are bruised from my many climbs between the floor and the counter, my hands ache from clutching the roller, my neck is sore from tilting it to see to paint near the ceiling, and I’m a few pounds lighter than I was at the beginning of the week (I think there’s magic in my stretchy pants.  I lived in them Sunday through Thursday.  When I put on real button-up pants today, they were looser than I remembered them being.  I have magical stretchy pants.)…anyway, despite the fact that I can barely keep my eyes open at 9PM on a Friday, I feel great. 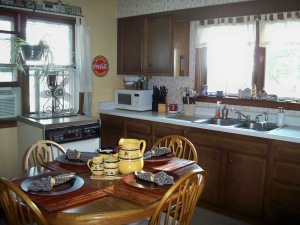 I accomplished something this week.  Maybe I’ll paint the bathroom ceiling next week…