Phew!  I’ve been MIA again, friends.  Suffice it to say, much is happening in La Casa de Merrow, and I’ve sort of let my blogging obligations slip.  I was hoping to make more time for writing once the holidays passed, but as you can see, I haven’t kept up with my own resolutions.  I’m working on it; there is much room self-improvement in 2012.  I’m just a work in progress, what can I say?

Anyway, with the passing of Thanksgiving, Christmas, and New Year’s, we are now working toward the next big event in our lives: the arrival of our first nephew, who is due February 12th.

Last weekend we drove to Punxsy to celebrate my sister-in-law Lindsay’s baby shower for baby boy Finn, who is scheduled to arrive in just about a month.  Lindsay did an incredible job planning her own shower, bringing her vision to life beautifully in a quaint B&B with a “Build Baby’s Nursery” theme complete with a storybook cake accented with cupcakes positioned to resemble a bookworm. 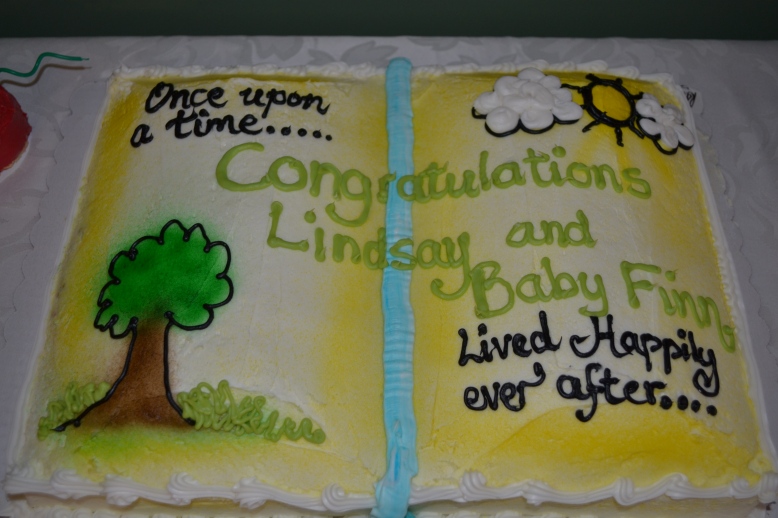 Inspired by "The Very Hungry Caterpillar"

The food table was a group effort, and a sophisticated smorgasbord of finger foods and appetizers, including an Edible Arrangement and a candy bar of chocolate-covered raisins, Jelly Bellies, and gummy bears.  My mother-in-law made a veggie pizza and some tortilla roll-ups.  Lindsay’s mom brought a veggie tray, shrimp cocktail, and her famous bean salsa.   I pitched in with a couple of our party favorite recipes- two of the same ones I contributed for Lindsay and Kevin’s wedding just a couple of months ago: spinach dip and a 3-in-1 cheese ball.  (I included the recipes in this post.) 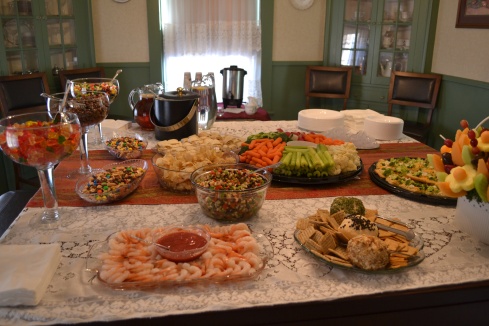 During one of our baby shower brainstorming sessions, Lindsay and I surfed the internet for shower ideas; she would find an idea of what she wanted, and I surfed Pinterest (a new obsession of mine) for photos of how to implement them.  This turned out to be a successful endeavor, resulting in these beautiful bookmarks that Lindsay put together:

Another result of our brilliant brainstorming was this adorable punch made of berry blue Kool Aid, lemon-lime soda (pop!  I say pop!)  and white cranberry juice.  Actually, I was unable to find plain white cranberry, so I used white cran-strawberry.  We floated snowflake-shaped ice cubes  and vanilla ice cream on top alongside a couple of rubber duckies to create this perfectly adorable shower punch: 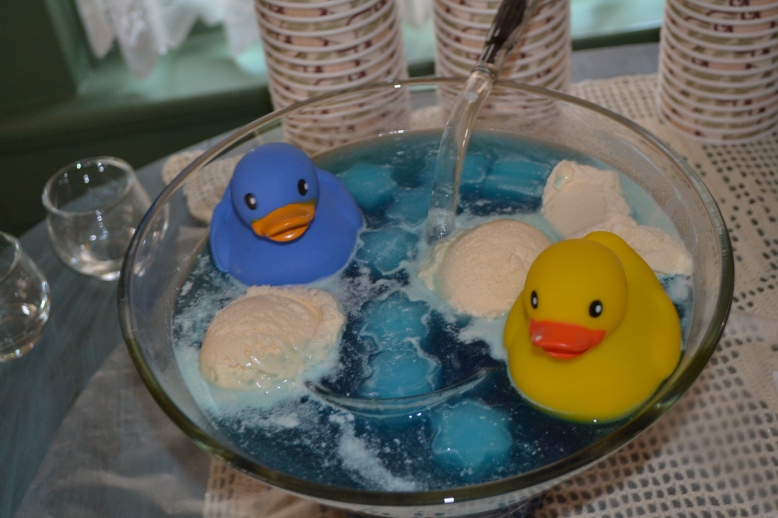 And, of course, since the theme of the shower was “Build Baby’s Library,” each guest brought a book to add to Finn’s bookshelf.  And surprisingly, out of about 40 guests, no two people brought the same book.  Mommy-to-be is wonderful, gorgeous, and glowing, if not a little uncomfortable.

And in just a few weeks, we’ll get to meet the little guy we’ve been waiting for!