Seriously.  Pinterest has deluded me into thinking I’m awesome.

Please tell me I’m not the only one this has happened to.

I’m an “ideas” girl.  I’m really good at ideas.  I can see all kinds of awesome things in my head.  I just have a hard time getting my body to cooperate with my brain to get those ideas into concrete “stuff.”  It’s kind of like a lack of hand-eye coordination that has manifested itself into every single fiber of my being.  It’s debilitating.  And incredibly frustrating.

I spend far more hours than I’d care to admit surfing pages on Pinterest looking at others’ ideas and pinning them on my boards because seeing others’ ideas makes me think I can do those, too.

In other words, I’m the real-life definition of a Pinterest Fail.

I’m starting to get back to crafting, finally.  Which means I’ve created lots of things that, well, look nothing like the images I’ve pinned to my boards.  See the following: I sewed curtains for the twins’ room when I couldn’t find any already made that I liked.  Sewing is so not my thing.  They turned out as sort of a disaster.  Hanging them in a certain way somewhat hides the flaw in my measurements, but the crooked hem lines are still pretty obvious.  At least the fabric was only $3.97/yard.

I found this adorable pumpkin that I HAD to make last weekend.  The Pinterest version: The Danielle Version is incomplete because I’m out of jute and I keep forgetting to buy it and the fake leaves when I’m out.  (Also, apparently I need to start drinking more expensive wine because it seems my favorite brands all have switched to rubber corks.  Our of the 26 I needed, I only had 7 that were actual cork.  There may be ten or so in a box set aside for another project in the basement.  Crap, I forgot about those…)

I saw something similar to this at a craft show/flea market a couple of weeks ago with my mom and my sisters, and decided to steal some of Ryan’s wood from the garage to try to do it myself: 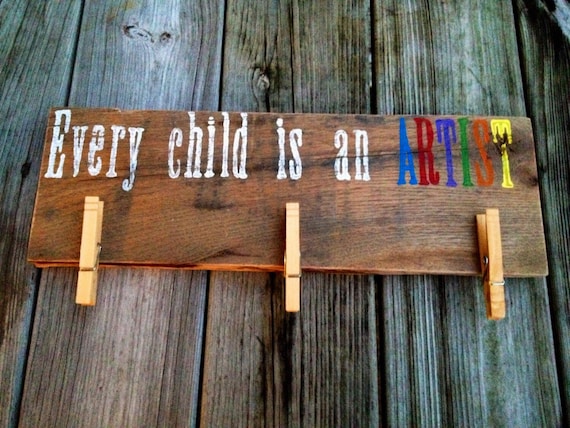 This is the Danielle Version:

(I can’t take credit for the actual artwork.  That’s by our preschooler.  Pins I’ve seen have also suggested digitizing all school artwork so that as things fade, fall apart, etc, we still have record of all of his artwork from school.  I’ve kept everything he’s done thus far, but in one year and two weeks of preschool plus three years of craft day at the library, we’ve filled a JC Penney shirt box.  Eventually, I’m going to run out of storage space.  Fortunately, I live with a computer genius who assures me that if I back up my computer regularly- like more than once a year as I seem to do- everything I transfer from my camera should be safe.  On a server, I think.  Or maybe on “the cloud,” whatever that is).

I’ve tried several recipes too (as noted in this post).  I’ve thrown two birthday parties for our three boys, the ideas for which mostly all came from Pinterest.

On a related note, crafting gives me ADD and anxiety because every time I get on Pinterest I find an idea I MUST try, so as I’m gathering materials, I find more half- finished projects and inspirations I’ve had once, which means I MUST FINISH ALL OF THE PROJECTS.  Right now.

And this past week, because I pinned three cleaning schedules on my “Home” board (I took a cue from Grey’s Anatomy episode names and decided that all of my board names need to be song titles), I felt like my house was a disgusting, disorganized mess (cause, yeah, three boys under age five), I went crazy with fall cleaning.  And when I say crazy, I mean not even my car or our dog were exempt.  I mean, you can’t have a clean house if your dog is shedding all over everything you just cleaned.  Never mind the kids, who obviously thought it was a fantastic idea to put their fingers, lips, noses, feet…and who knows what else… all over everything I’ve painstakingly scrubbed this week.  I even used the one “cleaning hack” I saw where you use a pillowcase to clean ceiling fan blades- I’d recommend that one!

Which is why it’s Thursday night and I’m sipping a glass (or two…) of red following the Grey’s Anatomy premier and writing about it instead of cleaning more stuff.  This mama is pinned. out.