I have a problem.

Actually, I got 99 problems but…

So,let’s focus on my two biggest problems of the moment:

There’s a humorous back story here, and a semi-related and wholly hilarious YouTube video parody to go along with it.  The back story is this:

Our oldest son goes to preschool three days a week, for two and a half hours each day.  He takes a snack every day, and he really loves to pick what he’s going to take- though, some days he prefers to be surprised; it really is a mood thing.  Among his favorite snacks to take are yogurt, these seasoned pretzels, fruit, graham crackers, goldfish crackers, and granola bars.  I started making my own granola bars about two years ago because they go REALLY fast in our house.  Ryan loves them at breakfast time.  And after dinner. They’re perfect for the boys’ “after nap snack,” as our oldest says.  And I love them too.  So those little boxes of eight that you pay $2 for?  Doesn’t even get us through a day- I can’t justify it when it takes just a few basic ingredients and little more skill than one needs when making Rice Krispy Treats.  So last week, the little guy asked me if we had any granola bars for me to send for his snack this week.  I didn’t, at the time, but I’d purchased what I needed with the intention of making some.  Then, he said these magic words: “Mom, could you make pumpkin spice granola bars?”

The words were music to my ears.  I immediately began searching for recipes.  Google, Pinterest, and all of my cookbooks.  But…I kept coming up empty.  I had a few results, but nothing that really sang to me (or the ingredients I had on hand.)  Sadly, I couldn’t let it go.  I had to find something that would work.  Because, not only had my baby boy asked me for something and I wanted to deliver, but also because it’s October and I’ll put pumpkin in ANYTHING this time of year!  So, I resorted to experimentation.  I went to my go-to granola bars recipe, then found one recipe on Pinterest I could tweak to my needs, and attempted to mash the two together. (By the way, if you’re following the links to check out the recipes, note that the first one is for a 13×9 pan-sized batch; the second is for an 8×8).

And so…the first attempt turned out to be pretty decent.  I would say they could still use a little something (chocolate chips are at the top of that list.  I’d also say mixing in a half a cup or so of finely chopped pecans might take this right up to where it needs to be).  But, for my first attempt and also for a completely fabricated recipe, on the first try, I’m a little proud of myself.  And my boy was happy, so, yay me!

Wanna try them?  Here’s how I did it: 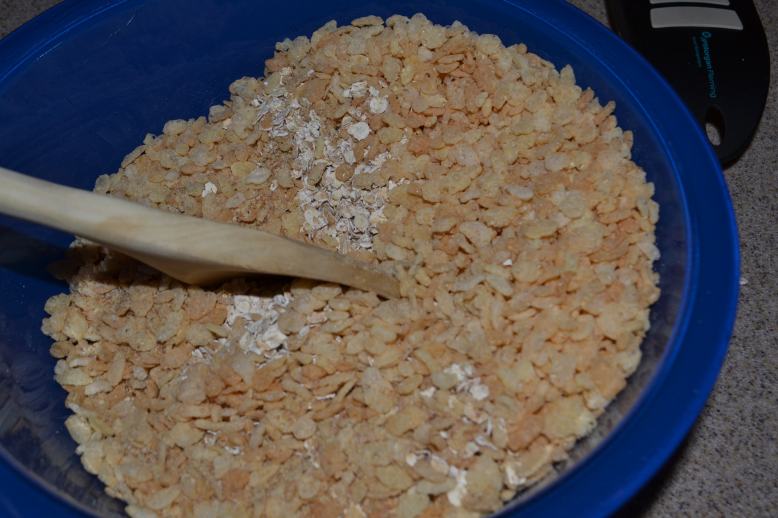 Stir to combine, then pour into a 13×9 pan
lined with aluminum foil (this makes it easier to
pull the bars out to cut them, and also helps with
cleanup) 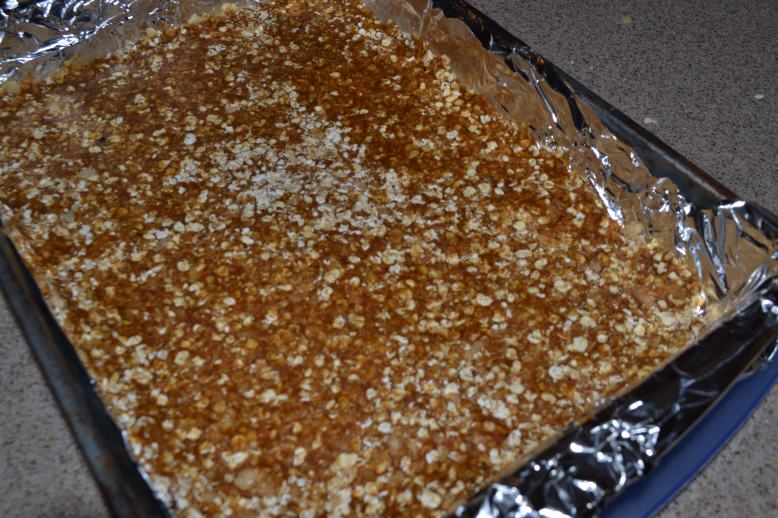 If you’re going to add chocolate (and, by all means, DO!), make sure you don’t mix them into the pumpkin mixture; they’ll become a melty mess.  Instead, once you’ve pressed the bars into the pan (I use a sheet of waxed paper.  Press HARD), sprinkle 1/3 cup or so over the top, then press gently once more.  And if you’re thinking of adding nuts (I totally will next time; this version is missing a bit of crunch), add them to the oats, cereal, and wheat germ or flax-seed.  Probably 1/4 to 1/3 cup is a good starting point.  And when you fall in love with these…

you can thank my son. Because I’m off to Starbucks for a PSL.

Please don't steal my stuff. The text and photos on this page are original works and ideas from my own head. If I use your work, I'll give you credit for it. Please extend the same courtesy to me. Thank you.
Loading Comments...
Comment
×
%d bloggers like this: